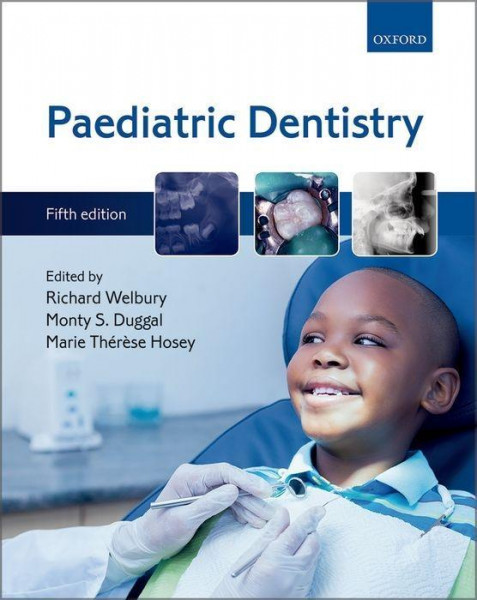 The fifth edition of Paediatric Dentistry is a comprehensive textbook for students and practising clinicians on theoretical and practical aspects of the field.

Professor Richard Welbury graduated BDS (Hons) (1978), MB BS (1984), and PhD (1989) from University of Newcastle-upon-Tyne. Appointments: 1991-2001 Consultant/Senior Clinical Lecturer, Dental School, Newcastle upon Tyne; 2001-2015 Professor of Paediatric Dentistry and Director of Dental PG Education Glasgow University; 2015 - Professor of Paediatric Dentistry and Research Lead, Dental School, University of Central Lancashire Published over 200 scientific articles, 12 book chapters and is co-author of five textbooks. President of the British Society of Paediatric Dentistry (2001-2002), President of the European Academy of Paediatric Dentistry (2006-2008) and Dean of the Dental Faculty of the Royal College of Physicians and Surgeons of Glasgow (2013-2016). ; Monty S. Duggal is an Honorary Consultant in Paediatric Dentistry at the Division of Child Dental Health, Leeds Dental Institute, Clarendon Way, Leeds, UK; Marie Therese Hosey completed her speciality training in Birmingham and was a Reader in Paediatric Dentistry in the University of Glasgow before joining King's College London in 2008. She has contributed to six dental and medical textbooks and is an Editor of four. She has examined at all levels both at home and abroad. She is one of the few UK dentists to have trained in anaesthesia. Her research interests are the pharmacological and behavioural management of anxious children, especially this who need general anaesthesia, and children with clefts. She has had research funding, mainly for phase II and III randomised controlled clinical trials, from the NIHR and the Scottish Chief Scientist office. She has an international reputation as both a researcher and as a speaker.