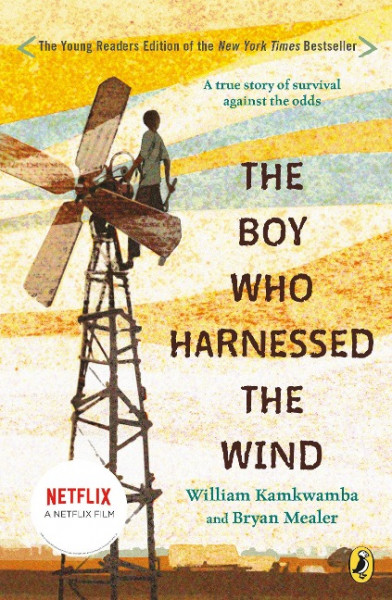 The Boy Who Harnessed the Wind: Young Readers Edition

The Boy Who Harnessed the Wind: Young Readers Edition

Now a Netflix film starring and directed by Chiwetel Ejiofor, this is a gripping memoir of survival and perseverance about the heroic young inventor who brought electricity to his Malawian village. When a terrible drought struck William Kamkwamba's tiny village in Malawi, his family lost all of the season's crops, leaving them with nothing to eat and nothing to sell. William began to explore science books in his village library, looking for a solution. There, he came up with the idea that would change his family's life forever: he could build a windmill. Made out of scrap metal and old bicycle parts, William's windmill brought electricity to his home and helped his family pump the water they needed to farm the land. Retold for a younger audience, this exciting memoir shows how, even in a desperate situation, one boy's brilliant idea can light up the world. Complete with photographs, illustrations, and an epilogue that will bring readers up to date on William's story, this is the perfect edition to read and share with the whole family. von Kamkwamba, William und Mealer, Bryan und Hymas, Anna

William Kamkwamba recently graduated from Dartmouth College. The original version of his memoir The Boy Who Harnessed the Wind was a New York Times Bestseller and a Publishers Weekly Best Book of the Year. He divides his time between Malawi and San Francisco, California.Bryan Mealer is the author of Muck City and the New York Times bestseller The Boy Who Harnessed the Wind, which he wrote with William Kamkwamba. Since publication, the book has received many honors and has been translated into over a dozen languages. Mealer is also the author of All Things Must Fight to Live, which chronicled his years covering the war in the Democratic Republic of Congo for Harper's and the Associated Press. His forthcoming book, The Kings of Big Spring, a multi-generational saga about his family in West Texas, will be published by Flatiron Books in early 2018. He and his family live in Austin.