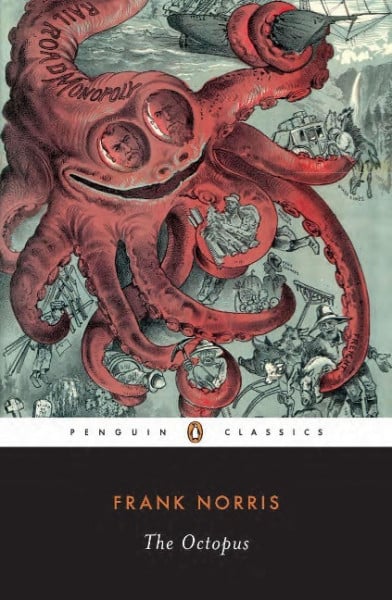 The Octopus: A Story of California

The Octopus: A Story of California

Like the tentacles of an octopus, the tracks of the railroad reached out across California, as if to grasp everything of value in the state Based on an actual, bloody dispute between wheat farmers and the Southern Pacific Railroad in 1880, The Octopus is a stunning novel of the waning days of the frontier West. To the tough-minded and self-reliant farmers, the monopolistic, land-grabbing railroad represented everything they despised: consolidation, organization, conformity. But Norris idealizes no one in this epic depiction of the volatile situation, for the farmers themselves ruthlessly exploited the land, and in their hunger for larger holdings they resorted to the same tactics used by the railroad: subversion, coercion and outright violence. In his introduction, Kevin Starr discusses Norris's debt to Zola for the novel's extraordinary sweep, scale and abundance of characters and details. von Norris, Frank

Frank Norris (1870-1902) was an American journalist and novelist. Among his novels are McTeague, The Octopus: A Story of California, and The Pit. His fiction is classified under naturalism and has been compared to the works of Émile Zola, Stephen Crane, and Edith Wharton.Kevin Starr (1940 - 2017) was an American historian and California's State Librarian, best know for his multi-volume series on the history of California. His writing won a Guggenheim Fellowship, and gold and silver medals from the Commonwealth Club of California. His books include Americans and the California Dream, 1850-1915; California: A History; and Golden Gate: The Life and Times of America's Greatest Bridge.