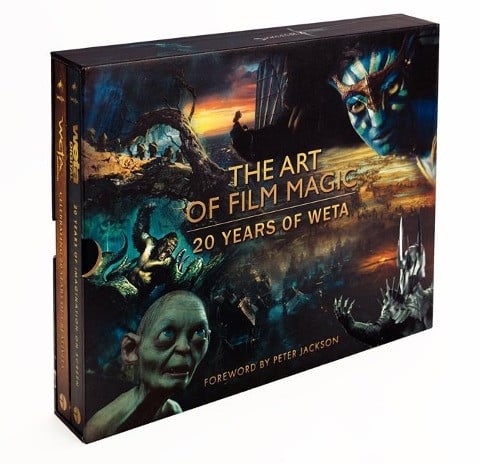 This deluxe slipcased two-volume set is an insider's tour of twenty years of film-making magic at Weta Workshop and Weta Digital, the creative companies behind such celebrated films as The Lord of the Rings, Avatar, The Avengers, King Kong, District 9 and The Hobbit. Brimming with never-before-published content, including concept designs, sketches, making of and behind-the-scenes imagery, along with interview material from cast and crew members, it is a stunning look at how the costumes, creatures and characters, weaponry, and visual effects are created for some of the world's most iconic films. A director will have a vision in their head of the kind of movie they want to create but they always need great teams to realise that vision. This is what Weta Workshop and Weta Digital do. Based in Wellington, New Zealand, these two companies, founded by Peter Jackson, Jamie Selkirk, Tania Rodger and Richard Taylor have been an integral part of some of the most ground-breaking and acclaimed movies of all time. von Hawker, Luke und Burgess, Clare

Weta Workshop is a multi-award winning conceptual design and physical manufacturing facility based out of Wellington, New Zealand, servicing the world's entertainment and wider creative industries. Weta Workshop is also a multi-disciplinary facility, with crew members expert in a diverse range of disciplines all housed under the one roof. These services include conceptual design and the manufacturing of weapons, armor and chainmail, specialist props, custom vehicles, specialty costumes, miniatures and models, special makeup and prosthetics, and public art installations or displays. The team at Weta enjoys engaging in projects holistically, from preliminary technical analysis and conceptual design through to manufacture across all departments and the final delivery of product and crew to set, anywhere in the world. Drawing on more than twenty years of filmmaking experience, five-time Oscar-winning design and special effects supervisor Richard Taylor is intimately involved in all projects from concept through to delivery. Best known for the company's design and effects work on award-winning film projects, including The Lord of the Rings trilogy, King Kong, The Chronicles of Narnia, Avatar, District 9, and The Adventures of Tintin, Weta Workshop is not limited to film and television, offering services to creative industries worldwide