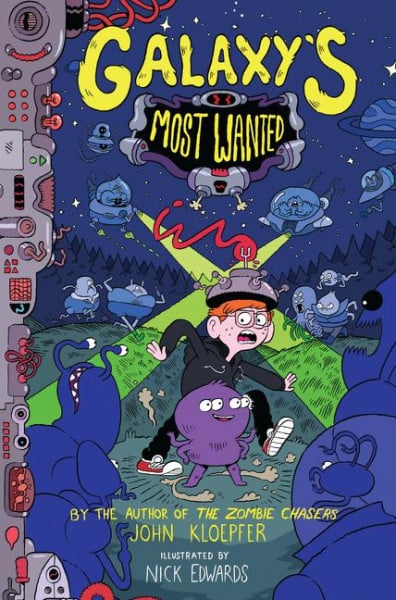 Aliens Attack! When science camp buddies Kevin, Warner, Tara, and TJ summon alien life to earth, they quickly find out that not all extraterrestrials come in peace. Can they stop an alien takeover and save the world in time to win the Invention Convention? John Kloepfer, author of the popular Zombie Chasers books, has done it again. Galaxy's Most Wanted is full of sidesplitting descriptions; a fast-paced, silly plot; a cast of diverse and endearing characters; and a slew of creepy-crawly aliens oozing off the page. With out-of-this-world black-and-white illustrations by Nick Edwards throughout, the first book in this new series is going to blast off!Meet the Characters: Kevin: Science genius. Physics, biology, chemistry, you name it, Kevin can do it. He's the brains of the operation, leader of the crew. Warner Reed: Kevin's best friend and resident cool dude. He's the guy to see if you've got a 2 a.m. junk food craving?but you'll pay top dollar for his top secret stash. Tara Swift: Not only is Tara supersmart and great at building things out of next to nothing, she's also in an all-girl punk band and the best drummer in the universe. (It's true?just ask her.) TJ Boyd: Computer problems? He's your man. TJ's a regular computer-programming prodigy. He's not much of a talker, though. Word around the campfire is that he damaged his voice box in a botched robotics experiment. von Kloepfer, John und Edwards, Nick

John Kloepfer is the author of the popular Monsters Unleashed and Zombie Chasers series, as well as the out-of-this-world alien trilogy Galaxy's Most Wanted. He lives in Los Angeles with his wife, Jenny, and their dog, Doozy.