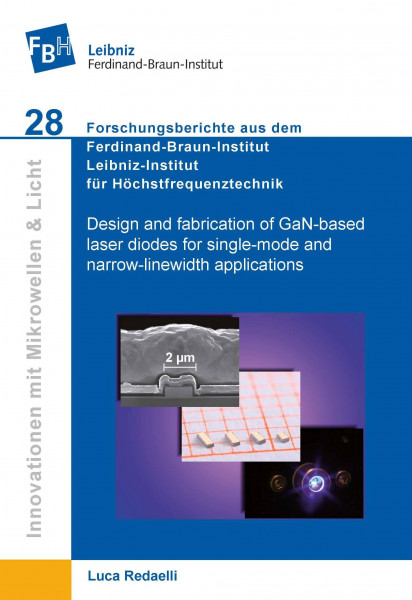 In this work, several aspects concerning (In,Al,Ga)N laser diodes with high spectral purity, designed for applications in spectroscopy, were studied. A complete fabrication process for ridgewaveguide laser diodes on GaN substrate was developed. The lateral size of the ridge waveguides was as narrow as 1.5 µm: this is necessary in order to achieve lateral single-mode lasing in (In,Al,Ga)N laser diodes.A peculiar property of (In,Al,Ga)N laser diodes is that, when the ridge is narrow, the threshold current strongly depends on the ridge etch depth. This phenomenon was investigated by fabricating laser diodes with different etch depths. For ridge widths below 2 µm, the threshold current of shallow-ridge devices was found to be more than two times larger than that of comparable deep-ridge devices. Moreover, in the lateral far-field patterns of shallow-ridge laser diodes, side-lobes were observed, which would support the hypothesis of strong index-antiguiding. The antiguiding factor at threshold was experimentally determined to be about 10, which is among the largest values ever published for (In,Al,Ga)N laser diodes. The devices were further studied by simulation, and the results confirmed that the carrier-induced index change in the quantum wells can compensate the lateral index step if the ridge is shallow. This, in turn, reduces the lateral optical confi nement, which increases the threshold current and generates side lobes in the far-fi eld patterns.Based on this research, blue and violet laser diodes suitable for packaging in TO cans and continuous-wave (CW) operation exceeding 50 mW were fabricated. An external cavity diode laser (ECDL) was also realized, which could be tuned over the spectral range 435 nm - 444 nm and provided a peak emission power of more than 27 mW CW at 439 nm. As an alternative approach to obtain a narrow spectral linewidth, the feasibility of monolithically integrated Bragg-gratings was studied. von Redaelli, Luca