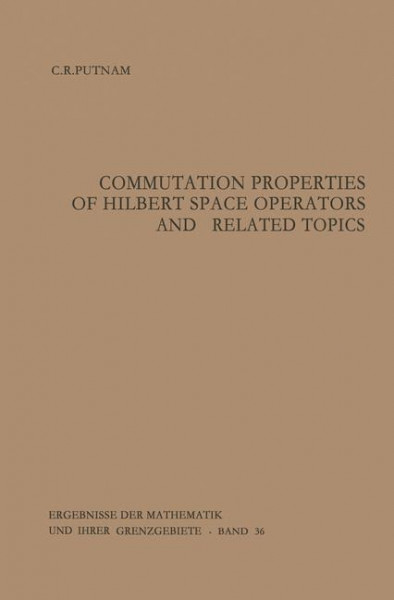 What could be regarded as the beginning of a theory of commutators AB - BA of operators A and B on a Hilbert space, considered as a dis­ cipline in itself, goes back at least to the two papers of Weyl [3] {1928} and von Neumann [2] {1931} on quantum mechanics and the commuta­ tion relations occurring there. Here A and B were unbounded self-adjoint operators satisfying the relation AB - BA = iI, in some appropriate sense, and the problem was that of establishing the essential uniqueness of the pair A and B. The study of commutators of bounded operators on a Hilbert space has a more recent origin, which can probably be pinpointed as the paper of Wintner [6] {1947}. An investigation of a few related topics in the subject is the main concern of this brief monograph. The ensuing work considers commuting or "almost" commuting quantities A and B, usually bounded or unbounded operators on a Hilbert space, but occasionally regarded as elements of some normed space. An attempt is made to stress the role of the commutator AB - BA, and to investigate its properties, as well as those of its components A and B when the latter are subject to various restrictions. Some applica­ tions of the results obtained are made to quantum mechanics, perturba­ tion theory, Laurent and Toeplitz operators, singular integral trans­ formations, and Jacobi matrices. von Putnam, Calvin R.