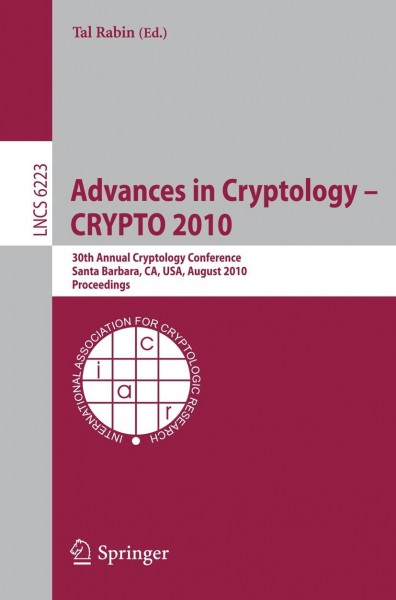 CRYPTO2010,the30thAnnualInternationalCryptologyConference,wassp- sored by the International Association for Cryptologic Research (IACR) in - operation with the IEEE Computer Society Technical Committee on Security and Privacy and the Computer Science Department of the University of C- ifornia at Santa Barbara. The conference was held in Santa Barbara, Calif- nia, during August 15-19, 2010, in conjunction with CHES 2010 (Workshop on Cryptographic Hardware and Embedded Systems). Zul?kar Ramzan served as the General Chair. The conference received 203 submissions. The quality of the submissions was very high, and the selection process was a challenging one. The Program C- mittee, aided by a 159 external reviewers,reviewed the submissions and after an intensive review period the committee accepted 41 of these submissions. Three submissions were merged into a single paper and two papers were merged into a single talk, yielding a total of 39 papers in the proceedings and 38 presen- tions at the conference. The revised versions of the 39 papers appearing in the proceedings were not subject to editorial review and the authors bear full - sponsibility for their contents. The best-paper award was awarded to the paper "Toward Basing Fully Homomorphic Encryption on Worst-Case Hardness" by Craig Gentry. The conference featured two invited presentations. This year we celebrated 25 years from the publication of the ground-breaking work of Sha? Goldwasser, Silvio Micali and Charles Racko? "The Knowledge Complexity of Interactive Proof-Systems. von Rabin, Tal