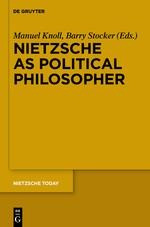 This collection establishes Nietzsche's importance as a political philosopher. It includes a substantial introduction and eighteen chapters by some of the most renowned Nietzsche scholars. The book examines Nietzsche's connections with political thought since Plato, major influences on him, his methodology, and his influence on subsequent thought. The book includes extensive coverage of the debate between radical aristocratic readings of Nietzsche, and more liberal or democratic readings. Close readings of Nietzsche's texts are combined with a contextualising approach to build up a complete picture of his place in political philosophy. Topics include the relevance of Bonapartism and classical liberalism, Nietzsche on Christianity, the cultural history of Germany, the ¿ermensch, ethics and politics in Nietzsche, and the controversial question of his political preferences and affinities. Nietzsche's political thought is compared with that of Humboldt, Weber and Foucault. The book is essential reading for anyone concerned with Nietzsche's thought, political philosophy, and the history of political ideas. von Knoll, Manuel