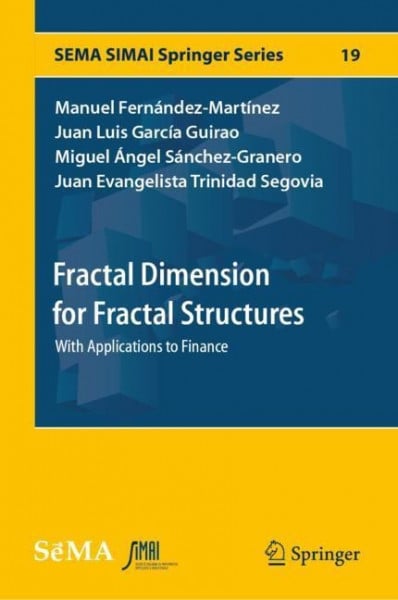 Fractal Dimension for Fractal Structures
with Applications to Finance

This book provides a generalised approach to fractal dimension theory from the standpoint of asymmetric topology by employing the concept of a fractal structure. The fractal dimension is the main invariant of a fractal set, and provides useful information regarding the irregularities it presents when examined at a suitable level of detail. New theoretical models for calculating the fractal dimension of any subset with respect to a fractal structure are posed to generalise both the Hausdorff and box-counting dimensions. Some specific results for self-similar sets are also proved. Unlike classical fractal dimensions, these new models can be used with empirical applications of fractal dimension including non-Euclidean contexts. In addition, the book applies these fractal dimensions to explore long-memory in financial markets. In particular, novel results linking both fractal dimension and the Hurst exponent are provided. As such, the book provides a number of algorithms for properly calculating the self-similarity exponent of a wide range of processes, including (fractional) Brownian motion and Lévy stable processes. The algorithms also make it possible to analyse long-memory in real stocks and international indexes.This book is addressed to those researchers interested in fractal geometry, self-similarity patterns, and computational applications involving fractal dimension and Hurst exponent. von Fernández-Martínez, Manuel

Manuel Fernández-Martínez holds an international PhD in Mathematics from UCLA. His research interests include fractal structures, fractal dimension, self-similar sets, computational applications of fractal dimension, and self-similar processes and their applications to finance.Miguel Ángel Sánchez-Granero is an Associate Professor at the Department of Mathematics, University of Almería, Spain. He is the author of a number of publications in international journals on asymmetric topology, self-similarity, fractal structures, and fractal dimension with application to financial series.Juan E. Trinidad Segovia, PhD, is a Full Professor of Finances at the Department of Economics and Business, University of Almería, Spain. His research interests include financial modelling, portfolio selection, CAPM and, most recently, applications of Statistical Mechanics to financial markets. He has published over 20 papers in peer-reviewed journals. Juan Luis García Guirao is a Full Professor of Applied Mathematics at the Technical University of Cartagena, Spain. In 2011, at the age of 33, he became Spain's youngest Full Professor of Mathematics. The author of more than 100 research papers and Editor in Chief of Applied Mathematics and Nonlinear Sciences, his work has been recognised with the 2017 NSP award for researchers younger than 40 years old, and with the 2017 JDEA best paper award.