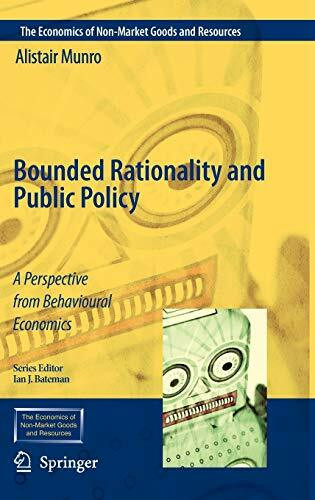 Bounded Rationality and Public Policy
A Perspective from Behavioural Economics

This book is about bounded rationality and public policy. It is written from the p- spective of someone trained in public economics who has encountered the enormous literature on experiments in decision-making and wonders what implications it has for the normative aspects of public policy. Though there are a few new results or models, to a large degree the book is synthetic in tone, bringing together disparate literatures and seeking some accommodation between them. It has had a long genesis. It began with a draft of a few chapters in 2000, but has expanded in scope and size as the literature on behavioural economics has grown. At some point I realised that the geometric growth of behavioural - search and the arithmetic growth of my writing were inconsistent with an am- tion to be exhaustive. As such therefore I have concentrated on particular areas of behavioural economics and bounded rationality. The resulting book is laid out as follows: Chapter 1 provides an overview of the rest of the book, goes through some basic de?nitions and identi?es themes. von Munro, Alistair